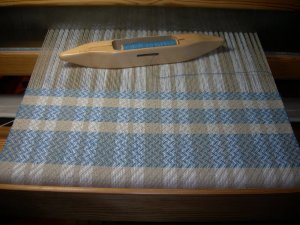 Tonight I’m working on another twill towel, and have gone back to a Swedish Berga cottolin in another shade of blue and treadling it differently as I have for each towel, so though they are all coming off the same warp, each towel is one-of-a-kind.

As I wrote awhile back, this is a 10 shaft twill. This time treadling is 1-5, 10-6, varying the repeats so I can change sides I begin and end colors on.

The other day I was working on another twill towel, this time with Borgs red cottolin for the accent/border color. However, when I washed the towel, the red had run, in spots, into the white along the edge of the border. It looked okay when it came out of the washer, but when removed from the dryer, there were definite pink spots. This red was definitely not colorfast.

Tonight, the red border towel became an experiment. It went into the washer with Retayne and hot water. When the cycle was done, I looked and though there was still a bit of pink it did look better. After a second wash with Retayne, it again looked a bit better. With the third wash I added Synthrapol, again with hot water. Soon I will check it again and hopefully toss it into the dryer. I’ll let you know how it comes out.

As the labels on the Synthrapol and Retayne bottles suggest possible cancer issues, I had not wanted to use it on a towel that might be used in a kitchen. When it became an experiment to see if the towel could be saved, I set those concerns aside. This particular towel will not be sold because of what was used on it. The Borgs red cottolin? It’s in the trash. I do have some Berga red cottolin and will try that on the next towel and will report on that, too.

4 thoughts on “Love Blue, but I’m Seeing Red Where I Shouldn’t!”