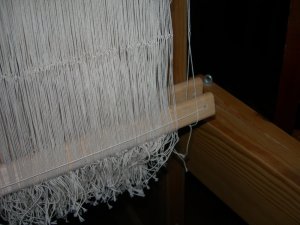 Have you ever had heddles (Texsolv or string) slide off the ends of your lower shaft bars? I have. About 17 years ago, I learned an easy, inexpensive fix for this from Ken Colwell…

Take a length of strong thread (seine twine, cotton), measure twice the length of the lower shaft bar plus a few inches extra. Thread it through the small hole at one end of the shaft bar (front to back), take it along the length, in back, thread through the small hole at the other end (back to front), and tie the ends together at front center. Make sure the string, both in front and back of the lower shaft bar is OUTSIDE the heddles. This will keep the bottom of the heddles from sliding off. If you place the string inside the heddles, they will slide off. This works for both Texsolv and string heddles.

I usually use this method on my looms. Not long ago I moved heddles on my countermarche, and neglected to put these strings on my CM shafts. Yes, a few heddles went sliding off the lower shaft bar. I was finishing weaving the hem of a towel and didn’t notice right away that the first shaft was hanging up on the right side. After removing the temple, I found a few floats at the right side of the hem which were easily repaired, but could have been avoided. These strings will be back on every shaft on the CM loom before I begin weaving again on Wednesday.

There is one shaft and accompanying jacks not on the loom. I am sure the shaft bars are upstairs, but I’m not sure about the jacks, so I will check for them tomorrow. Once they are on the loom I’ll be able to add the last 200 long-eye heddles.

Right now, I am making sure the heddles are not twisted, then adding the lower shaft bars back in. This is not a difficult task, just a bit time-consuming. I would rather do it properly now rather than encounter difficulties when threading or nearly ready to weave.

When the lower shaft bars are all in and twisted heddles are straightened out, I will add a long string to each lower shaft bar which will keep the bottom half of the heddles from slipping off the lower heddle bars. Pic(s) on that will be posted in a day or two.

The plaid towel is off the loom and upstairs along with another towel, next to my sewing machine. After the hems are sewn, a photo will be posted here. Right now, back to the heddles.

Earlier this year, my kids and I brought out and re-assembled my Glimakra Single Unit Drawloom which had been stored for the past thirteen or so years. With no directions, only my memories of assembling it long ago, we put it together. More parts, lamms, treadles, etc. are currently residing on the floor under it, but as yet do not need to be added.
After straightening out and counting the old string heddles, I found there were about 100 on each of the first nine ground shafts, with the tenth shaft having none at the moment. I must search through bags of string heddles and see if I have more of them, but expect I’ll need to order a cone of seine twine, make a jig, and make not only the needed heddles, but more for all the shafts.
After reading that the plastic maillons were no longer available, and not believing it, I wrote to Sara von Tresckow, of Woolgatherers in Fond du Lac, WI, who said she would be able to order the needed maillons from Sweden; they arrived several weeks later.

I knew I needed more lingos, and was told by a couple places that only the new U-shape lingos were available. Fortunately, Becky Ashenden of Vavstuga wrote me she had around 450 of the old style lingos (above) and would sell them to me at what I considered to be a very reasonable price, which was wonderful news. A short time later, two very heavy boxes arrived. I wiped each lingo off with a damp cloth, dried them, then wiped each one down with lemon oil, then “dried” them again. 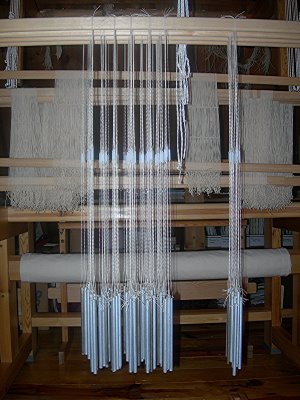 After the maillons arrived, I found the cone of fine, very strong thread I had purchased from Ken, and set to work making new pattern heddles. I could have bought the newer U-shape lingos, and bought Texsolv pattern heddles, but preferred setting the loom up as before, in a more traditional way. So this is the point I am at now, some pattern heddles made, more are needed.
Now I must decide what to make a new drawcord warp from, do my calculations, and get it ordered. As I wrote previously, I am moving these looms down to the main floor of my home, so need to do that before I can go much further.
In the meantime, the remainder of the striped warp is waiting to be woven off, so the countermarche loom can be moved, too. Progress on weaving off the warp, making pattern heddles, making the drawcord warp, and moving the looms will be posted as I continue this journey.