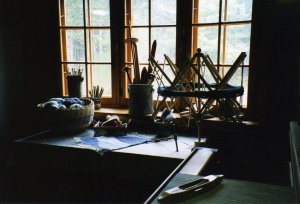 My interest in weaving began in May 1979, during a visit to “The Looms” in Mineral Point, WI, owned and run by the late Ken Colwell. The museum had a wonderful old Norwegian counter-balance barn-type loom, a Jacquard loom and a working table-size Jacquard loom. In addition, there was a large collection of spinning wheels, and an outstanding coverlet collection.

In the classroom area were several Glimakra countermarche looms, and upstairs was a loom with an opphampta attachment, a single unit drawloom, and an AVL computer-driven dobby loom. I knew I would return.

Being newly married, it took a couple years before I expressed my desire to spend a week at The Looms to attend a Beginning Weaving class, and did so in Summer 1981, followed by an Intermediate Weaving class in 1982. Before returning home, I ordered a 10 shaft Glimakra countermarche loom, which I still weave on today. Each summer for about ten years I would travel to Mineral Point and attend a weaving class, or Colloquy, an annual gathering of members of Complex Weavers. Around 1986, I brought home a used, 10 shaft Glimakra single unit drawloom. I had just started weaving on that loom, when we moved to the northwoods of WI. With three moves in five years, the drawloom has been disassembled for the past thirteen years. I am now looking forward to learning about damask and drawloom weaving.

Marriage, three children, and homeschooling were priorities over the past 21 years. While I continued to do some weaving and spinning, the strong desire to pursue my interests in fibers never left. Now that my oldest daughter is attending college, and my two teens attend high school, I am now able to pursue my weaving and other fiber interests.

In order to make my studio space accessible to visitors, we are about to move everything from a large upstairs room to the main floor of our home. This is going to be interesting.

The photo above is of a quiet moment in Shuttle Works Studio.